How Martin Luther King, Jr. Changed the World With His Words 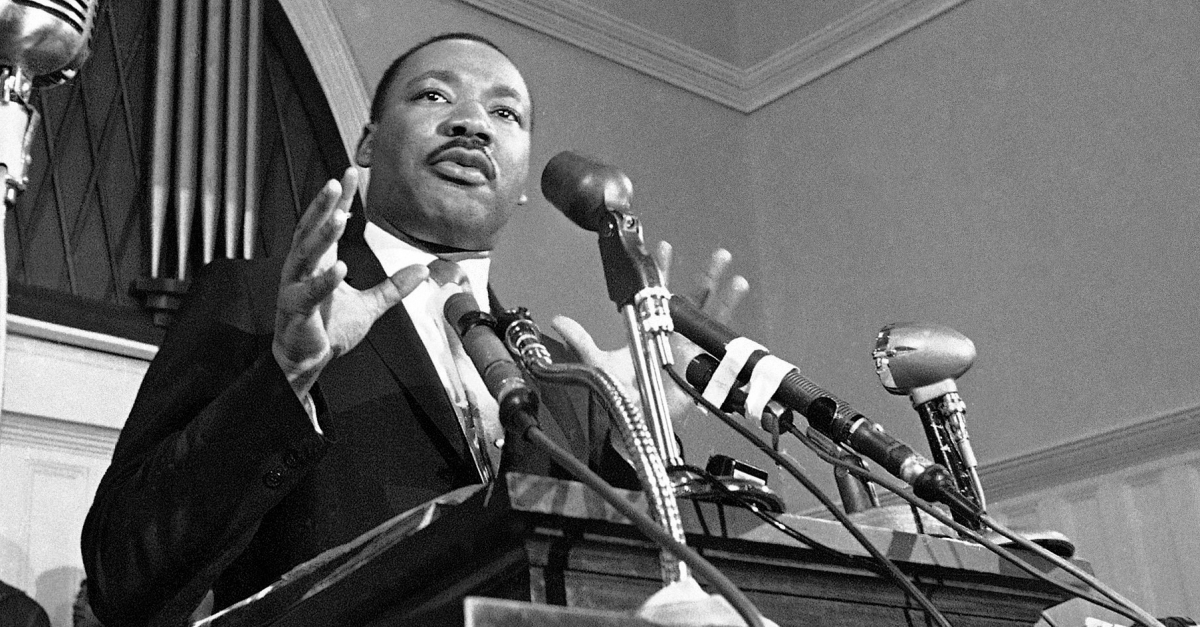 Last week, we showed you how Donald Trump’s speech patterns influence his audience. Today, we will highlight the words of a different leader in a different time, Reverend Martin Luther King, Jr.

We honor Dr. King for his ability to inspire change by using words that impacted the hearts and minds of millions of people during his life and after his death. The man is one of the most important people of the 20th century without inventing anything new, employing thousands of people, or getting elected to a high office. His lasting legacy is framed by and around the speeches he gave and the thoughts and actions they inspired.

It’s worth noting, before we go further, that Dr. King was a master orator with far greater flexibility in his presentations than Donald Trump’s trademark consistency. We’ve broken down some of Dr. King’s most famous speeches into two basic categories and will highlight the similarities and differences within them.

Don’t worry, these are just fancy words for, “what charts we are looking at.”  Just like we did with Trump, we are looking at 2 major charts, and just like Trump, the first one is going to be Motivation and Commitment levels. The other chart we will be looking at is called Values/Priorities.

Motivation and Commitment is a mental hierarchy that we all advance through when making a decision. We start with Motivation and graduate through Ability, Logic, and Needs until we get to Commitment. While we don’t need to check the box in each category to do something, certain combinations are associated with the probability that the person will follow through.

Priorities is a ranked order of four decision-making criteria:

We use a combination of each of these in every decision we make. Sort of like a recipe. Some people prioritize stable relationships and keeping everyone happy over being honest or personal gain, while others might make a decision based on rules and doing things, “the right way.” This is not to say that any of these prioritizations are right or wrong, or that some are better than others. It’s simply a statement of how they are prioritizing a decision.

While Dr. King was a more versatile public speaker, many of his most famous speeches fall into two categories (with a few exceptions). The first group is characterized by his appeal to the ego of the audience, the second calls on their sense of community. It comes as little surprise that his writings and speeches appeal more to the emotional priorities of a community rather than the analytical aspects of a person.

We can do this, we will do this, and I don’t care what it takes.

Two of Dr. King’s most famous speeches are contained in this pattern group, which appeals to the ego and primal instincts of the audience. Emotionally charged and passionate, these are famous monologues that inspire us to take action. Ego, in this case, does not imply arrogance but instead points at the idea of autonomy and self-esteem.

I HAVE A DREAM (link to speech)

It makes sense to begin with the, “I Have a Dream” speech. At just over sixteen hundred words, it’s one of the most famous speeches in US history and recognized worldwide for its impact on the civil rights movement. Here’s what the analysis looks like: 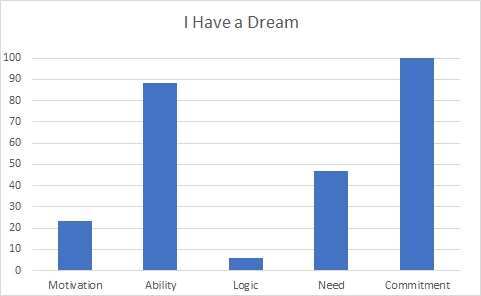 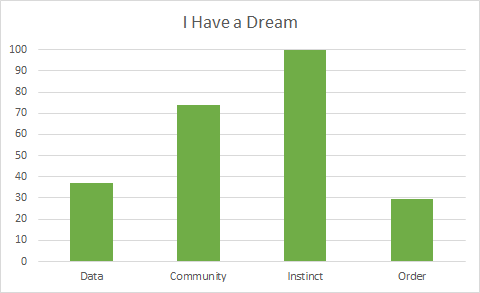 In the first graph, the highest two points are Commitment and Ability. There’s no need to talk about what they want or why they want it, so the Motivation and Logic scores are very low. The thing to focus on in this speech, like the next one, is his priority score. While his Community and Relationships score is high, it’s second to Instinct and Ego. Dr. King usually favored Community in his speech patterns, so seeing this shows an appeal to action without the need for proof. Scoring this high on Commitment and Instinct is what drives people to action, and is part of what makes this speech so inspiring to this day.

When I looked at the graphs I initially thought I had made a mistake. The Lincoln Memorial speech is incredibly similar in scoring to the I Have a Dream speech. In fact, a few phrases show up in both speeches (“free at last, free at last” etc). Both were prepared and delivered just a few days apart, which tells us about Dr. King’s state of mind and the audience he was speaking to. 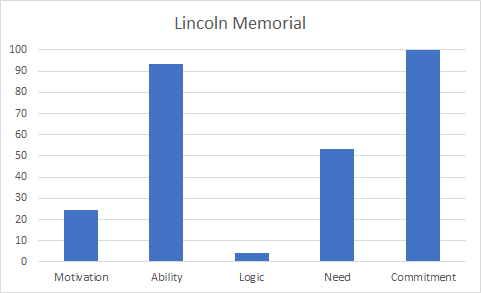 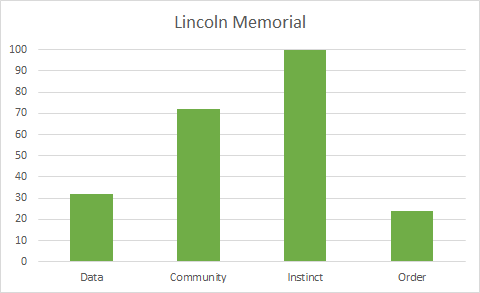 Again, we see the appeal to the Instinct/Ego priority set with complimentary support of Community and Relationships. This is not a speech designed to convince people that something is correct, it’s about telling people what to do. The shared truth is assumed, with no attention given to the accuracy of data or the presence of rational thinking.

Worth remembering here is that these are not off the cuff responses to questions, but crafted speeches with a specific purpose. The audience and outcome were at the front of his mind when Dr. King wrote and delivered both of these speeches.

We can do this if we work together

Getting people to agree with your words is one thing, but convincing them to walk with you into dangerous situations is another. To galvanize his audience towards a specific action, Martin Luther King gave speech after speech promoting the idea that the civil rights movement taking place all over America was a single, unified group. This isn’t a use of the “royal we” that gives Donald Trump his high scores in this category, it’s a more sincere creation of bonds and relationships that drew people together from all walks of life.

I HAVE BEEN TO THE MOUNTAINTOP (link to speech)

This is a much more balanced speech than the previous two we highlighted in the last section. While he emphasized what is possible, MLK appealed to a much wider audience here. Dr. King had a unifying message to bring people together but also supported this speech with more logic and accuracy than the others. 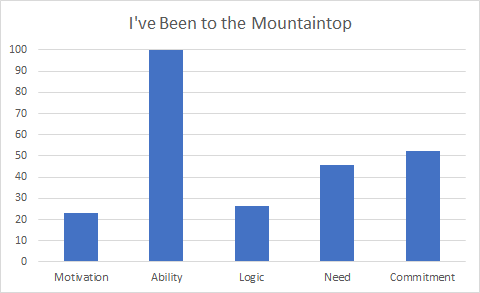 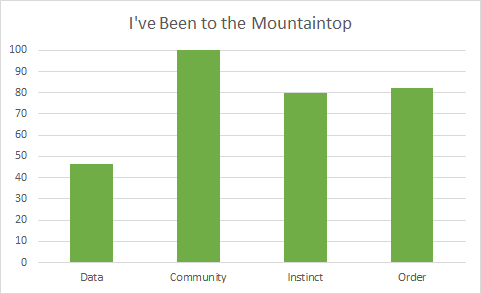 These graphs show a man casting a wide net and satisfying the values of a large audience. A speech like this is exactly how you create buy-in from people who don’t fully support you or your cause. While not as moving or quite as famous, the fundamentals and technique applied to this speech underscore just how convincing and effective a communicator can be.

LOVING YOUR ENEMIES (link to speech)

This speech has more Socratic leading and rational thought than his more emotional speeches. It’s balanced and tempered. It’s not a call to action, in fact, it’s a sermon. It’s the most balanced of the speeches shown here, with couplet pairs that round out the communication strategy. Just looking at the chart, you can see categories in pairs of approximately the same score. 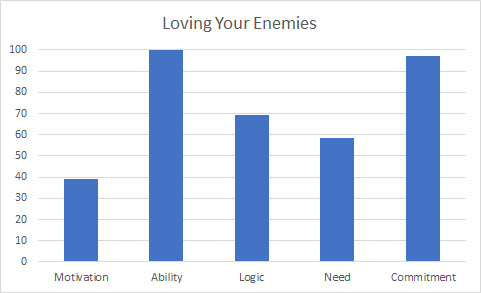 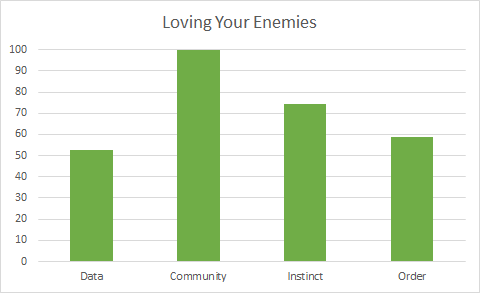 Interesting to point out is that Dr. King gave this sermon while ill, and said that this was less a public speech and more sharing a long and deep-held belief of his own. This may be why it’s so well rounded. He has taken years to contemplate and discuss this idea from so many viewpoints that he can articulate the central theme in a variety of convincing ways.

LETTERS FROM A BIRMINGHAM JAIL (link to the text)

Okay, so this isn’t technically a speech, but it’s worth including for its social relevance. It’s also interesting for this exercise because it has the highest score for Process and Order than just about anything Dr. King ever said. The transparency and explanation of his decision making behind the scenes let the audience understand the approach and philosophy behind non-violent protests. 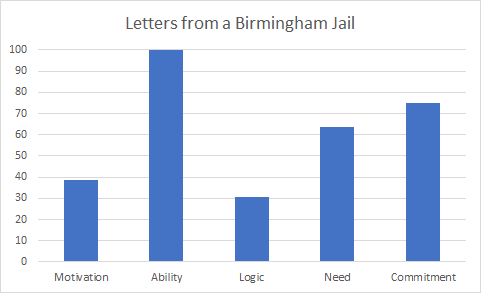 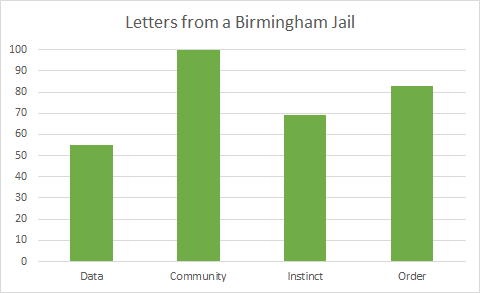 Here, the author is emphasizing facts and structure. It’s not rationalizing, it’s specificity for the sake of helping the audience understand what happened.

OTHER SPEECHES WE ANALYZED

We would be happy to spend more time analyzing more of the speeches of Martin Luther King, but at this point, I think it makes sense to just share some charts and let you see what you can see for yourself.

The following speeches don’t fall into either of these categories, they are just great examples of rhetoric and writing worth appreciating today. 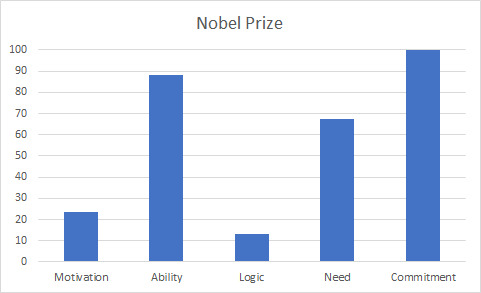 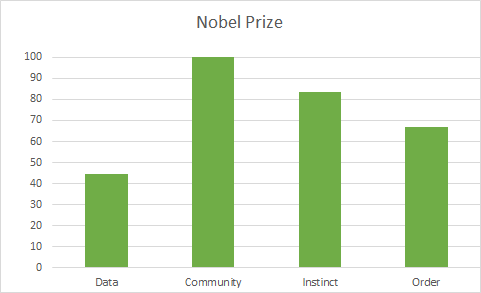 WHERE DO WE GO FROM HERE (link to speech) 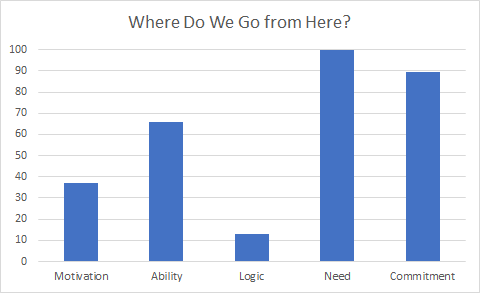 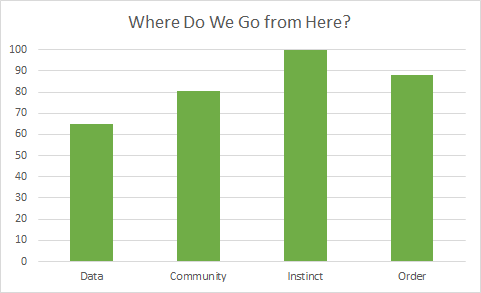 BEYOND VIETNAM  (link to speech) 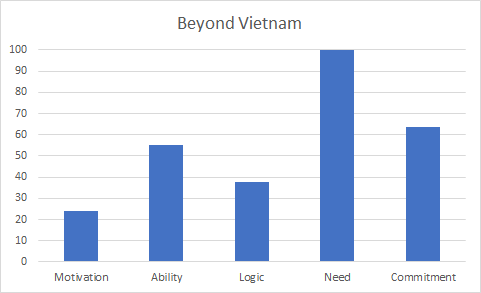 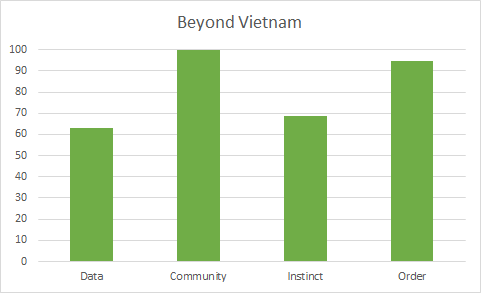